Venita Ray of Legacy’s Public Affairs Department was just named one of HIVPlus magazine’s Most Amazing HIV-Positive People of 2016. She just returned from a trip to Durban, South Africa, to attend the 21st Annual International AIDS Conference as one of 18,000 delegates who attended. Her trip was made possible by HIV Justice World wide and the SERO project. 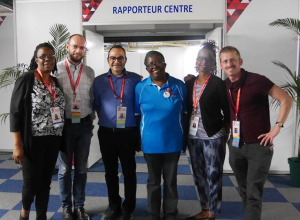 Venita served as a conference rapporteur to document the proceedings at AIDS 2016, focusing on community and leadership presentations.

“We’ve seen to many advances in the biomedical side, but we need to see more opportunities and willingness for community-led education and leadership including people living with HIV for sustainable initiatives to end the epidemic,” says Venita. “Here in Houston, I’m excited about launching an advisory group of women living with HIV to inform the clinical staff at Legacy Montrose about their community’s their needs and concerns.”

Venita is a powerful voice for HIV/AIDS community-led advocacy and education. She was especially interested to see how other parts of the world are creating coalitions of HIV/AIDS stakeholders to collaborate. “We’re already doing that at Legacy with our Positive Organizing Project, leadership advocacy and training. I saw other areas have plans to incorporate community groups into HIV prevention efforts, but the implementation is not yet complete.”

The most surprising finding at the conference for Venita was 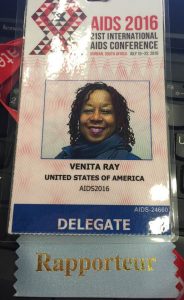 learning that adolescent girls and young women are at the highest risk of HIV infection world-wide. Although that group is only 11% of the overall population, it counts for 20% of new HIV infections. Harmful gender norms and inequalities, insufficient access to education, sexual and reproductive health services, are root causes of the problem.

Another highlight was bringing attention to the stigma, discrimination and criminalization of HIV that has led to wrongful prosecution and incarceration. “I was so proud to represent Legacy and Houston and be around people who’ve devoted themselves to ending the epidemic,” says Venita. “I can’t wait to see how I can take what I’ve learned and implement it here.”