The number of new annual HIV infections in Houston has remained relatively steady over the past five years. Legacy believes that 1200-1300 new diagnoses each year is far too many, and has launched an ambitious effort to cut that number in half by 2021 thanks to a new grant from AIDS United and its Southern REACH initiative. The END (Ending New Diagnoses) HIV/AIDS Houston Project will provide a plan for the City of Houston that will outline specific actions to be taken, identify funding resources, and set a road map for how the city can reduce new HIV diagnoses.

END relies heavily on the participation of people affected by and involved in HIV treatment and advocacy, including people living with HIV themselves. “If we wonder why our efforts are not as effective, we need to look at the root causes of why new diagnoses are disproportionally affecting some populations (African-American men) more than others,” says Legacy Public Affairs Specialist Venita Ray. “You see issues of poverty, unemployment, housing instability, and HIV rampant in the criminal justice system.” 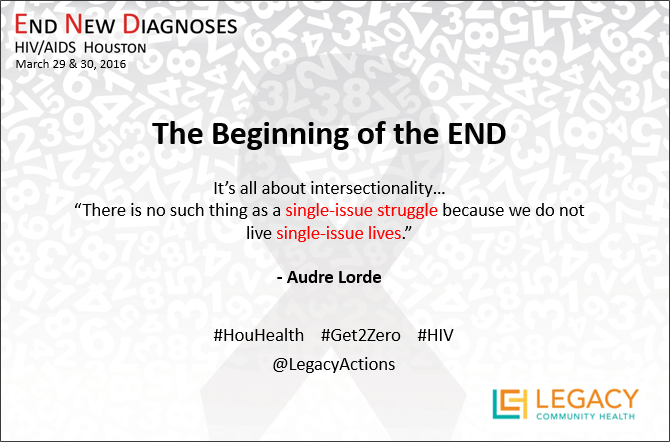 A kick off conference in March brought together 80 stakeholders to create the plan’s framework. Representatives from the City of Houston, medical researchers and providers, advocacy and faith-based groups, and the Texas Department of Criminal Justice are currently forming the five core workgroups outlined at this meeting. They will cover:

Access to Treatment: identifying people with HIV, getting them into care, and retaining them in treatment.

Prevention: implementing measurable education efforts in the public and in schools.

Criminal Justice: implementing changes to treat inmates with HIV, and connecting them to care upon release.

Federally Qualified Health Centers (FQHCs) like Legacy will be an important part of the plan. Texas high rate of uninsured citizens leads the nation, so FQHCs are often the only place for many residents to go for health care. Legacy is the city’s leader in HIV outreach and education, but we can’t do it alone.

“Currently, the city of Houston puts zero general revenue dollars towards HIV prevention. Funds spent on such an important initiative come solely from government or private grants,” says Januari Leo, Legacy’s Director of Public Affairs. “We would like to see the city make more of a monetary investment in stopping HIV, but we need buy-in and participation from other entities to make this work.”