If you don’t live in one of these zip codes, it doesn’t mean that you’re safe from getting HIV. However, if you do, the disease is more prevalent in your community and you should educate yourself, educate others and find out how to protect yourself.

Here’s what you need to know. 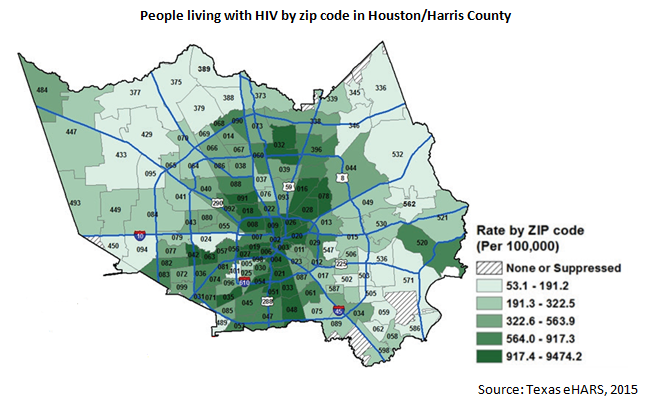 HIV stands for the human immunodeficiency virus. According to the CDC, HIV weakens the immune system (your body’s natural defense against illness) by destroying important cells that fight disease and infection.

Within a few weeks of HIV transmission, flu-like symptoms such as sore throat, fever and excessive tiredness can occur. Then the disease may show no signs within your body until it progresses to advanced HIV disease or AIDS. AIDS stands for acquired immune deficiency syndrome which means a person’s immune system is so weakened that they have several other related health conditions.

How is HIV treated?
Once a death sentence, HIV is now highly treatable. It is treated with antiretroviral therapy (ART) medication. When taken the right way and every day ARTs, or HIV, medicines can reduce the amount of virus in the blood to a low or undetectable level. In fact, the CDC says someone diagnosed with HIV and treated before the disease is far advanced can live nearly as long as someone who does not have HIV. Mother to child transmission of HIV has been reduced to about 1% when a pregnant woman is on ARTs during pregnancy.

How can I get HIV?
HIV is transmitted sexually and by sharing needles.

How can I keep from getting HIV?
If you are sexually active, use condoms with lubricants.

You can also take a daily medication named PReP that can prevent a person from acquiring HIV.

Don’t share needles or syringes if you inject drugs, hormones, steroids or silicone. HIV can spread through needle and syringe sharing.

What are common HIV myths?
There are a lot of myths about how you can get HIV. Let’s debunk them. You can’t get HIV from the toilet, kissing, hugging, sharing food, insect bites, bathing, sneezes and coughs, or sweat. Also, HIV is a not a “gay disease.” Thousands of heterosexual people are living with HIV.

How do I know if I have HIV?
Get tested with a health care provider. Logon on to getested.cdc.gov for a list of free, fast and confidential testing locations near you.

Know your status. Get tested. Let’s #ENDHIVHou. Be in it to END it.